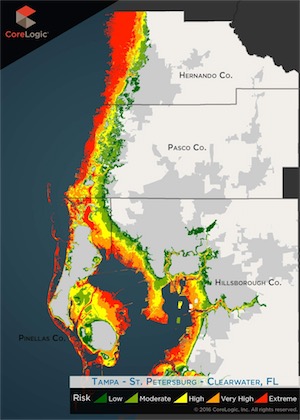 Nearly 455,000 Tampa Bay homes could be damaged by hurricane storm surges, the most in any major metro area except Miami and New York City. And rebuilding all those homes could cost $80.6 billion.

That’s according to a report released Wednesday by CoreLogic, a global property information firm, as the 2016 Atlantic hurricane season officially kicks off with two named storms already on the record books.

CoreLogic said 454,746 Tampa Bay homes are vulnerable to hurricane flooding, a number that represents about a third of all the area’s homes. Of those, 92,103 are in what CoreLogic calls the “extreme’’ risk zone. That means they could be affected by even a relatively modest Category 1 with winds from 74 to 95 mph and a surge in the 4- to 5-foot range.

Tom Put your Bio Here
View all posts by Tom Torgersen →
This entry was posted in Home Insurance. Bookmark the permalink.